The following is part 1 of a recap of a talk I gave this past weekend at the CMC-South (California Math Council) conference in Palm Springs, CA. I attempted to make the case that educators and mathematicians should expand the definitions of proof in order to make this important aspect of mathematics accessible to elementary and middle school students, and more accessible to high school students.
__________

Currently, the class Geometry has a monopoly on proof in K-12 education. For the college football fans out there, Geometry is the Alabama of mathematical proof in school. Like Alabama, I hope that the stranglehold Geometry has on proof is on it's way out (take that, Crimson Tide). Geometry is too often the first time students are introduced to mathematical proof, and too often the last time students grapple with proof until well into college. I don't know how related this is, but the following graph represents a common refrain. "Oh, I hated math. I liked Geometry, but...ugh, everything else."
I do not see expanding the definition of proof as a hugely controversial proposal. After all, Merriam-Webster, a respected dictionary (at least it used to be), defines mathematical proof as "a test which shows that a calculation is correct." The Silver-Burdett Mathematical Dictionary I found on my classroom shelf doesn't even include a definition of proof. We can all agree that we can do better than that.


The Issue of Formality

The Online Free Dictionary's definition of mathematical proof represents what I see as the status quo: "a formal series of statements showing that if one thing is true something else necessarily follows from it." Starting with an agreed upon set of axioms (truths), proof is the process of showing that other things are also true. I don't want to change this; I simply want to relax our idea of "formality" to be more age-appropriate. Showing that something works for three examples will never be a proof. Saying "because it seems to be true" won't cut the mustard, hack it, or be up to snuff either. But what about the following argument related to a certain number trick?

First, the trick.
And your answer is....

And my proof? Let's say your secret number is box. 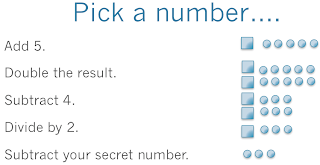 Is this formal enough?


The Social Aspect of Proof

Our above definition of proof says nothing about who decides whether or not a proof is adequate. For a professional mathematician, this work is done by the rest of the mathematical community, a community of skeptical peers. This shouldn't be any different in the classroom, and no, the teacher shouldn't be playing this role. Supporting, yes, but the community is the other students in the classroom. So here's my definition of proof I give to my 5th and 6th graders:
—Convincing your skeptical peers that a mathematical statement is true
And then I put my money where my mouth is. When a student claims to have a proof of an existing conjecture, they give their argument using whatever medium makes sense, ranging from a verbal argument to an interpretive dance. The rest of the class takes on the role of (respectful) skeptical peers. Once everyone is convinced, the class has a new theorem. Giving a cogent argument is hard work. Looking for flaws, counter-examples, and unclear logic is hard work. All of my students are working hard. The hardest part of this culture is not letting yourself, as the teacher, play the role of prophet. Students have to know that you'll let them create theorems that aren't true (at least for a bit). Otherwise, they have no incentive to play the role of skeptical peers. They'll just wait for your cue, whether it be "Sounds great! Anyone have any reasons to question that proof?" or "Hmmm...is that always going to be true?" Remember, we want the students to be analyzing the proof, not the teacher's response.

I learned inductive proofs in Pre-calculus. Geometry was the class where I learned two-column and indirect proofs. I didn't know you could write proofs in paragraph form until I was in college and proofs without words didn't hit my radar until after I was teaching. There are a few problems with this, the first of which is that two-column proofs are a structure for proving, not a proof technique.

The blog Math With bad Drawings has a cheeky, but poignant post titled "Two-column proofs that Two-column Proofs are Bad" that addresses many of the issues with this being the sole vehicle for proof in school. While the structure is intended to scaffold the idea of deductive proofs, it too often obfuscates the important idea of using a set of assumptions to show that something else must be true. 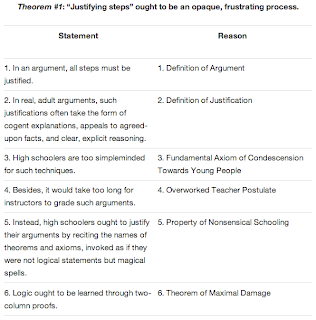 Two-column proofs are also not a proof technique, but a way of organizing proofs. Imagine students going their whole life thinking that filling in data in a table was statistics.

The other major issue with two-column proofs is that they are completely disconnected to how people make arguments in real life. I don't think the following has ever happened in the history of the world (but please let me know if I'm mistaken). 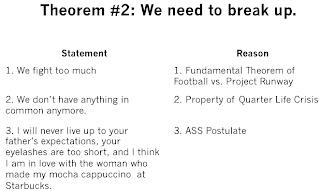 I believe there are many proof techniques that students can begin to grapple with in elementary and middle school.  Prove something using words. Draw pictures. Acquaint students with the ideas of indirect reasoning, induction, and parity. Introduce or create simple axiomatic systems and prove other truths using deductive reasoning. I'm telling you. These can all be done at a much earlier age than they are currently done. This is big, and a lot, and will be flushed out in part 3 of this tome post.

I have a list of unanswered questions. You will most likely have more.

Some thoughts to ruminate and questions to ponder. In the end, I think this boils down to my belief that we will have a higher level of mathematical thinking and discourse if we allow ourselves a lower level of formality related to proof. Please feel free to disagree. You may submit your arguments (proofs?) in the comment section.

Part Two: The Life Cycle of a Math Problem