Proof Doesn't Begin with Geometry: The Life Cycle of a Math Problem

The following is part 2 of a recap of a workshop I led this weekend at the CMC-South (California Math Council) conference in Palm Springs, CA making the claim that educators and mathematicians should expand the definitions of proof in order to make proof accessible to elementary and middle school students. Part 1 of my recap on redefining proof can be found here.
__________
There is a life cycle to math problems (not to be confused with exercises) in my classroom. We start with a wild guess.

This is something that should be done quickly, individually, and even if students don't have all the necessary information to answer the question.

Immediately: Seriously. After five seconds everyone should be writing something down--or by the time you finish reading this sentence.

Individually: There's some awesome research out there about priming and anchoring. The general idea is that if you ask a group to make a guess, the value of the first guess will significantly affect later guesses. Imagine asking a group of students to guess the population of Istanbul. If the first guess is 100, even though most students will recognize this as way too low of a guess, this anchor will cause future guesses to be smaller. Students have been primed to give smaller guesses. On the other hand, if the first guess is 100,000,000, you would expect guesses to be too high. It would be great fun to try this out with a couple classes and collect some data on mean guesses and their relationship to the first guess. Let me know if you try this. Daniel Khaneman's Thinking, Fast and Slow has a slew of examples, some of which are much scarier than the example I just gave.


German judges with an average of more than fifteen years of experience on the bench first read a description of a woman who had been caught shoplifting, then rolled a pair of dice that were loaded so every roll resulted in either a 3 or a 9. As soon as the dice came to a stop, the judges were asked whether they would sentence the woman to a term in prison greater or lesser, in months, than the number showing on the dice. Finally, the judges were instructed to specify the exact prison sentence they would give to the shoplifter. On average, those who had rolled a 9 said they would sentence her to 8 months; those who rolled a 3 said they would sentence her to 5 months; the anchoring effect was 50%. (Englich, Mussweiler, and Strack in Khaneman p. 125)

There are other reasons to have students write down their guesses before they share, a practical one being you then know everyone has a writing utensil in their hand.

Lacking Information: This is another way to lower the stakes. If you ask students to guess something where they don't have all the necessary information (which I usually make explicit), then the stakes are that much lower for them to be right. Inspired by a talk immediately before mine by Brad Fulton, I quickly put this slide together and asked teachers to guess what number lay behind the black box.

There's no way you can know the answer to this (unless you went to Brad or my talk, and even then you can't be sure I didn't change the value). That said, your wild guess will most likely be a speed and it will probably be somewhere between 0 mph and 1000mph. I could have also asked participants to guess the answer to this problem and this is probably what I would do with students (creating a sense of what a reasonable answer would be before working on the problem versus reflecting on whether or not their answer is reasonable after working on the problem).

After making a wild guess, I ask students to use appropriate mathematical habits of mind such as estimating, bounding, and contextualizing to make educated guesses. These are still guesses (and students still may not have enough information to solve the problem), but they are guesses based on some initial reasoning and strategies.

Estimating: This broad strategy for guessing includes rounding (73*88 is relatively close to 70*90), chunking (the height of that tree looks to be about 8 of me, or around 45 feet), and disaggregation (dividing an estimation task in a number of smaller, easier estimations) If you're unfamiliar with Fermi problems, these problems will keep you busy for as long as you want. And anyone who writes off estimation as not being that important, tell that to the US government and BP who are currently wrangling over how much oil spilled from the Deep Horizon disaster in 2010, with ramifications to the tune of billions of dollars.

Bounding: I introduce the terms "lower bound" and "upper bound" to my students early in the year. Similar to making wild guesses, asking students to make a guess you know is too low and a second guess you know is too high keeps the stakes low and is accessible to every student. It's also a great way to build in intermediate success points while working on a problem. Students feel success when they narrow their lower and upper bounds. It's worth saying again: this is a really powerful tool. If you don't believe me, give the following to your students who have no idea what calculus is and watch what they come up with in terms of a lower and upper bound. 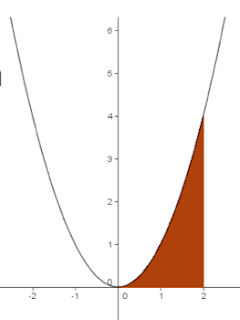 Contextualizing: Getting students to start thinking about reasonable answers before they even really start solving the problem will pay dividends. Consider the train problem above. If students spend the time to realize that the answer is going to be between 0 and 280 miles, they will think twice when they solve the problem incorrectly and get 400 miles as an answer.

The next step is moving from an educated guess to a conjecture, or a proposition that you think to be true. This is the meat of mathematical problem solving, and applications of prior knowledge and mathematical habits of mind should be abundant.

At this point in time, students who are convinced that something is true work on proving their conjecture. I talked (at length) in part one of my recap about expanding our definition of proof, and will delve into examples of types of proofs that are accessible to younger kids in a later post.

Finally (well not really), the student shares his or her proof with the rest of the class and the class plays the role of skeptical peers, respectfully looking for counter-examples and holes in logic. It's pretty amazing to watch this when the cogs are well-oiled. I'll talk about how I start to build this entire structure using the game Mastermind in a future post. Assuming all goes well (the class gives a stamp of approval), we now have a theorem. Woo hoo!

One important note: if the class let's something slide that isn't true, I do not jump in and correct them. I really want them to believe that they are the ones in control of determining truth. That said, when this happens I know I have some work to do in order to push the class in a direction that will allow them to see the mistake(s) they made.

So there you have it. The life cycle of mathematics, completed below with what makes it a cycle: tinkering and inventing new problems. So much fun. 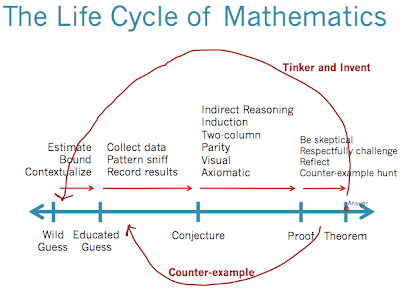 Part 3: Using Mastermind to Model the Life Cycle of a Math Problem