There is understandable skepticism out there (and some not so far away in the comments of previous posts) about students' ability to engage and come up with rich mathematical problems starting with what I am calling minimally defined problems. First, an anecdote of success with this approach that happened yesterday with some real, live 2nd, 3rd, and 4th graders at Math for Love.

These kids were given a chessboard and asked to come up with some math questions. Link on over if you want to see the great things the kids came up with.

Now don't get me wrong, I'm sure I could find an anecdote showing how a bear dancing on the back of a goat can lead to better proficiency with multiplication tables. One anecdote does not make a theory and should not send everyone running to rewrite the curriculum.

On the other hand, this doesn't mean that this anecdote should be ignored...

Anyway, I first want to address some of the issues/concerns about minimally defined problems and student posed problems that were brought up in earlier posts (comments that actually hit on many of the concerns that I am addressing in my proposal). Concerns/questions addressed here can be loosely separated into the following five questions:

1. Can this approach (or any approach for that matter) increase intrinsic motivation?
Ms. V: “I was a good math student, and I like puzzles, but I have very low "task-commitment"...Certain types of problems in certain contexts will totally get me working doggedly long past when anyone else cares. But other types of puzzles bore me (once I realize there's a trick/strategy/etc)....when I hit a wall and have run through everything I can think of...[So] how do you build stamina for such things in your students? Or is it just a mismatch between problem and personality? Or are these actually not such great problems, and the really great ones DO promote commitment? Or am I just lazy?”

2. How do you change the dominant culture of explanation-example-exercise-answer-satisfaction and should this culture be changed?
O: “I think I would be initially frustrated because the question is so open ended and there doesn't appear to be a right answer."
Perdita: “If I'd had the gumption I have now I'd have written "What comes after 5? Answer: 6". Not sure what I'd have done then, but you'd have lost me for ever.”
Perdita: " you were apparently targeting it at middle schoolers, but my 6yo answered it instantly, and I'd certainly expect any 11yo with reasonable number sense to do so, if not distracted by wondering what teacher wanted today...”

3. Are students (specifically, sixth grade students) capable of engaging in this kind of work?
Max: “It's very hard for me to see how a student without any background or context could approach that assignment in a productive way.”
Perdita: "the space of mathematical problems that are solvable with effort by a given person is very, very narrow by comparison with the space of all problems that that person can formulate. Preduction: if you ask children to make up their own problems, almost all of them will be either trivial, or insoluble."

4. What does this look like on a day to day basis?
Ms V: “What you do when they arrive in class could drastically change the results on future similar assignments, though. What *would* you do?”
O: "I think it can be frustrating to do work which you are uncertain if it is in the right direction because you can feel the work is pointless.”

5. What should we value in a mathematics education?
Perdita: "[This site] seems to be an exemplar of a trend to favour trivial creativity over solving hard problems, and it seems likely to encourage teacher-pleasing rather than mathematical work. "

I've been off the grid for about ten days, but still have things to share from my math teacher circle workshop from before I left.  Here's a puzzle for you.  Make the following with one piece of normal paper and a pair of scissors.  Nothing else.  No tape, glue, or photoshop magic. 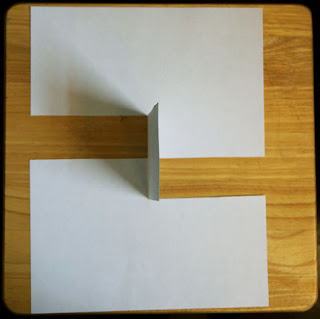